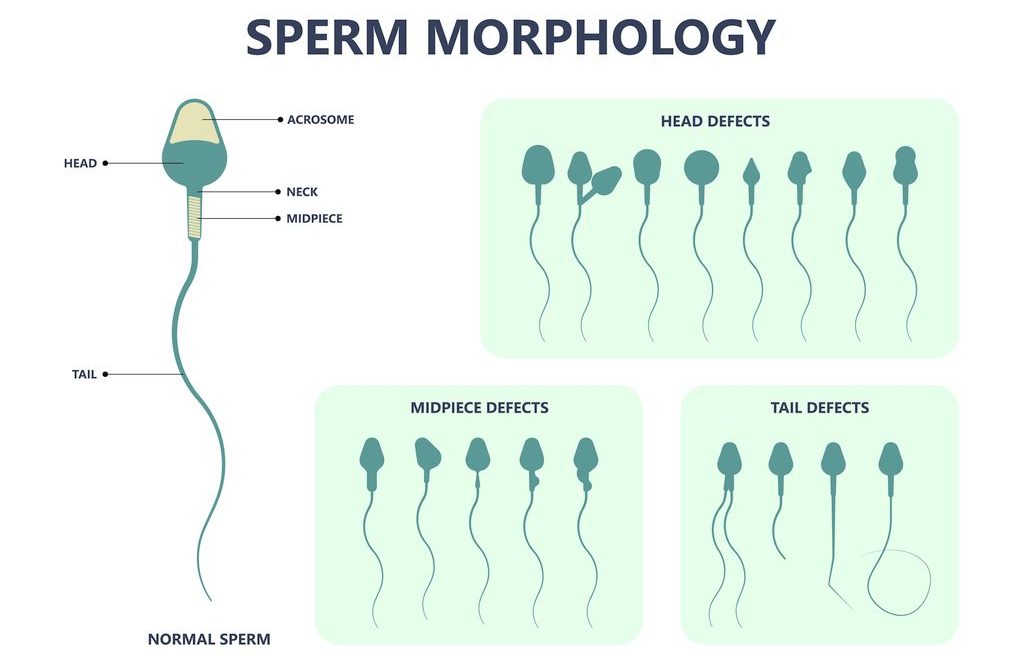 Your doctor may have recently informed you that your sperm morphology is abnormal. What does this mean for your fertility? What can you do?

Morphology is the study of the shape and appearance of your sperm under a microscope. Mainly, it examines the shape and size of the head of the sperm. Because it influences the ability of the sperm to fertilize an egg’s outer surface and dissolve it, the head shape is crucial.

Continue reading to learn more about sperm morphology and its possible impact on fertility.

Low sperm counts are the main cause of male infertility. However, the shape and size of the sperm may also be important.

Because sperm must have a specific shape in order to penetrate the egg’s outer layers, morphology can impact fertility. A majority of men with abnormal sperm morphology can still father children, although it may take longer to get pregnant or require the assistance of a fertility specialist.(1)

In vitro Fertilization (IVF) or Intrauterine Insemination might be options for people with sperm morphology problems. IVF can also be combined with intracytoplasmic fertilization (ICSI) to increase your chances.

Some researchers have shown that taking antioxidants and male fertility supplements for 3 or more months can improve abnormal sperm morphology.

IVF with ICSI allows the lab to select the sperm that is most likely to succeed based on morphology or motility. Then, they can inject the sperm directly into a woman’s egg.

After the egg and sperm have merged to form an embryo, the embryo will be placed in the woman’s womb at a suitable stage of development.

There are many forms of abnormal sperm morphology. These include:

The sperm will have an oval-shaped head and a intact midpiece. They also have a single, uncoiled tail.

Normal sperm will swim straight and without difficulty. Normal sperm will carry healthy genetic information, rather than too many or too few genes as is common with abnormally shaped Sperm.

Pertains to sperm with a large head. These sperm can have trouble fertilizing the egg of the woman because they often carry more chromosome.

Homozygous mutations of the aurora-kinase C gene may cause macrocephalic sperm. Since the cause of this type of sperm abnormality may be genetic, it’s possible for fathers to pass this condition to their sons.

Morphology where head of the sperm is smaller than normal, also referred to as small-head Sperm. A small-head sperm could have a defective acrosome, which is a pocket of enzymes within the sperm that allows it to enter the egg.

A form of small-head sperm where the head appears as a pin and carries minimal or no genetic content. Pinhead sperm could indicate a diabetic condition.

Sperm having cigar-shaped heads that could indicate a condition called varicocele(2), or repeated exposure of the scrotum to high temperatures such as daily sauna or hot tub use.

Tapered-head sperm often possess abnormal packaging of DNA genetic material (chromatin). Sperm aneuploidy, which is the addition or absence of one or more chromosome, has been shown in tapered-head sperm.

An extreme tapered head sperm variant, these sperm seem to have pathologies that appear to be different from tapered-head sperm. Sperm with thin heads are difficult to identify and could be caused by damaged DNA, varicocele, or faulty head formation.

Also called r​​ound-headed sperm, it’s an abnormal sperm morphology indicating that either the sperm has no acrosome, or it is missing the inner parts responsible for activating the egg to start the fertilization process.

A variant of this type of sperm is called the Decondensing-head sperm. It occurs when the sperm begins to prematurely break down its nucleus, and the unraveling DNA material fills up the entire sperm head.

A condition known as decapitated sperm syndrome leads to the formation of sperm without heads. They contain no genetic material or chromosomes.

Although this type of sperm might resemble a pinhead, close inspection will reveal that the sperm does not have any head at all.

Also referred to as acaudate sperm, tail-less sperm are sperm that can be seen during necrosis, which refers to the death of all or most of an organ’s cells.

Some research has shown that this type of sperm is not fertile, while other research has found no evidence to support this. The research is still ongoing.

Sperm having multiple heads and/or tails. If the sperm is two-headed, it’s called a duplicate Sperm. This condition has been tied to male exposure to toxic chemicals, smoking, high levels of prolactin hormone, and heavy metals such as cesium.(3)

Sometimes referred to as “sperm neck”, it could be caused by defective mitochondria, which are the energy-producing components of the sperm cells. This condition could also indicate that the centrioles (responsible for moving the chromosomes in the sperm neck) are missing or damaged.

These types of sperm have either been exposed to bacteria or an unfavorable seminal fluid environment. Because their tails have been damaged, these sperm are unable to swim. Coiled-tail sperm have been tied to heavy smoking.

Also called DFS (Dysplasia Fibrous Sheath) sperm, or short tail sperm, these sperm cells frequently exhibit low motility, or a complete lack of motility. This happens in late spermiogenesis, or when sperm cells are formed in the testis.

DFS patients may also suffer from chronic respiratory disease as a result of immotile-cilia syndrome. DFS, or stump-tail, is an autosomal recessive gene condition. DFS has been associated with a higher rate of sperm aneuploidies and abnormal chromosomes.

Is it Possible to Improve Morphology and Shape?

The body of a man is constantly producing new sperm, and these sperm may become less healthy as he gets older. Additionally, most men will see a decline in sperm production after 40.

However, the following changes can be made to your lifestyle and diet that will improve the morphology, health and fertility of sperm:

Some doctors will recommend that a man freeze his sperm while he is still young if he is planning to have a child when he is older. This will ensure that the best sperm is available when he wants to start a family. Sperm banking and freezing work best when a man has normal, healthy sperm.

The sperm morphology ranges are a measure of how many sperm are normal in size and shape. These sperm are the ones most likely to fertilize an egg.

The percentage of normal sperm cells can help determine your chances of conceiving with your partner. The ranges can vary from one lab to the next depending on how the sperm was assessed.

According to the World Health Organization (WHO), a semen sample containing sperm with a 4% or higher normal morphology is considered ideal for fertility.(4)

A lower percentage of sperm in the normal range will be found if the criteria are more strict. Your doctor will discuss the range with you, and help you to determine its effect on fertility.