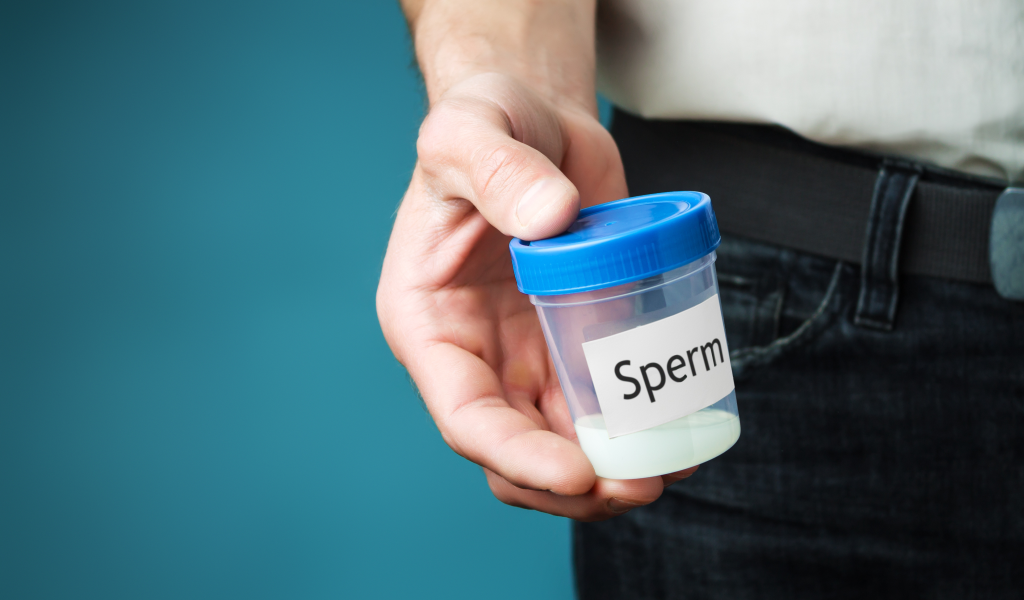 What is a Semen Analysis?

Semen analysis, also referred to as a sperm count test, evaluates a man’s sperm for health and viability. Semen is the fluid that contains the sperm that is released during ejaculation.

In order to get the most accurate picture of overall sperm health, doctors will frequently perform 2-3 separate sperm tests. According to the AACC (American Association for Clinical Chemistry), these tests should be performed at least one week apart and over the span of two to three months.(1)

Since sperm counts can vary from day to day, determining an average sperm count from the semen samples will usually give the most reliable evaluation.

Why Have a Sperm Count Test?

To Check For Male Infertility

A semen analysis is usually suggested when couples are having difficulties becoming pregnant. A sperm count test will help a physician ascertain whether or not a man is experiencing male infertility.
Additionally, a semen analysis can help detect whether a low sperm count or a dysfunction of the sperm is the cause for the man’s infertility.

To Verify the Effectiveness of a Vasectomy

A sperm count test is recommended for men who have undergone a vasectomy in order to verify that there are no sperm in their semen. A vasectomy is a long-term form of male birth control, where the tubes that send sperm from the testicles to the penis are closed off.

Following a vasectomy, doctors will frequently suggest that men undergo a semen analysis once a month for a three month period in order to make certain that no sperm cells are present in their semen.

What to Do Before a Semen Analysis

Your physician will cover everything you’ll need to do to prepare for a semen analysis. To get the most accurate results, it’s very important to adhere to the following guidelines:

How is Semen Analysis Done?

There are two important factors that are critical to ensuring a good sample for testing. For one, the semen has to be kept at normal body temperature. If the sample becomes too warm or too cold, it could adversely affect the sperm cells, giving inaccurate results. Additionally, the semen must be provided to the testing location within 30-60 minutes of ejaculation.

Other factors that could negatively impact a sperm count test include:

Testing Your Sperm Count at Home

Home sperm count tests are available for purchase, but they will only check for sperm count. These tests don’t evaluate sperm shape or motility.

Results for at-home tests can normally be obtained within just a few minutes. If a home sperm count test indicates a normal sperm count (that of over 20 million sperm per milliliter of semen), it’s not necessarily an indicator that the man is fertile, since it doesn’t factor in all the potential problems associated with male infertility.

If you have concerns about your fertility, the most best option is to have a lab test administered by a medical professional. A comprehensive lab test will give you a more complete picture of your overall fertility.

What Types of Things Does a Semen Analysis Evaluate?

There are several factors that a doctor must consider when evaluating a semen sample. For example, a sperm count test performed following a vasectomy will check for the presence of sperm, but when examining the possibility of fertility issues, a more in-depth semen analysis is required, beyond just a sperm count.

When analyzing your semen, your doctor will examine each of the following attributes:

A sperm count that’s between 20 million and 200 million is considered to be in the normal range.(2) Also referred to as sperm density, conceiving can be difficult if this number is low.

Sperm morphology refers to the shape and size of the sperm. A normally-shaped sperm cell has an oval head with a long tail. Abnormal sperm cells will have deformations of the head or tail, for example a large or malformed head, or double or crooked tails.(3)

These abnormalities could impact the sperm’s ability to reach and penetrate an egg. A normal semen sample will contain sperm that are more than 50% normally-shaped, but if more than 50% of a man’s sperm are abnormally shaped, it decreases his fertility.

Lab testing may reveal abnormalities in the head, midsection, or tail of sperm cells. There is also the possibility that the sperm do not fully mature, making them unable to effectively fertilize an egg.

To qualify as a normal result, over 50% of the sperm in the semen sample should demonstrate normal movement one hour after ejaculation. Proper sperm motility is necessary for fertility because the sperm must travel in order to fertilize an egg.

Sperm motility is rated based on a scale measuring from 0-4, with a score of 0 indicating no sperm movement, and a score of 3 or 4 indicating good movement.

The appearance of healthy semen should be an opalescent white to grayish color. A reddish-brown tint of the semen could indicate a presence of blood, and a yellowish tint could signify jaundice or a side-effect of medication.

The pH of a normal semen sample should be between 7.2 to 7.8. A result that is greater than 8.0 might indicate an infection.

Conversely, pH level that’s less than 7.0 could mean that the sample is contaminated or signify a blockage of the man’s ejaculatory ducts.

Although semen initially has a thicker consistency, it soon changes to a more watery form in order to improve sperm motility. A normal semen sample should liquify within 15 to 30 minutes, but if it takes longer, it could negatively impact fertility.

What Happens if the Results Are Not Normal?

Sperm cells that are abnormal will have difficulty reaching and penetrating the egg, making conception problematic. If your sperm test results show any abnormalities, it could indicate any one of the following:

If the results of your sperm test does indicate abnormal readings, your doctor will likely recommend that you undergo further testing. The type of tests may include:

How long will it take to get the results of my sperm test?

After you provide a semen sample, the results of your test will usually be completed within 24 hours to a week, depending on the lab you use.

How can I check my sperm count at home?

An at-home sperm test measures the sperm count, or the number of sperm contained in the semen.

When taking a home sperm count test you will need to ejaculate into a specimen container and your results will normally be available within a few minutes, although procedures for transferring the semen and testing the sperm can vary from testing kit to testing kit.

These tests work by detecting a specific protein that is only found in sperm. A positive result from a home sperm test indicates that your sperm count is within the normal range – but if the test shows a negative result, indicating a low sperm concentration, you’ll probably want to schedule an appointment with your doctor for a complete fertility evaluation.

However, although sperm count plays a major role in male fertility, it is not the only factor. If there is any question or concerns about the state of your fertility, it’s best to get a semen analysis done by a medical professional.

What is the best time for sperm test?

According to a study conducted with semen samples at the University Hospital of Zurich in Switzerland, sperm quality was affected by both the time of day and the season of the year that the samples were provided. The study of more than 7,000 men looked at 12,245 semen samples taken between 1994 and 2015, and measured factors including sperm count, concentration, motility, and shape.

Samples taken between the hours of 5am and 7.30am showed an increase in sperm count, concentration, and the number of normally shaped sperm, compared to samples taken later in the day. However, sperm motility did not appear to be affected by the time of day that the sample was collected.

Not only did the time of day appear to make a difference, the quality of the sperm varied depending on the season in which the samples were collected. Sperm count and sperm concentration both appeared to be significantly higher in specimens taken during the spring, and significantly lower during the summer.

Even though the causes leading to these differences in sperm quality aren’t fully understood, it is believed that certain hormones (including testosterone, melatonin, and cortisol) might play a key role.

How much does it cost to get sperm tested?

Although the cost of a semen analysis varies from city to city, and according to the type of test, basic sperm test that checks for sperm count and motility typically ranges anywhere from $50 to $200 or more. Specialized fertility clinics may also offer more advanced testing in connection with the semen analysis.

Doctors will usually begin with testing that is the least invasive, but if a cause is not found, more invasive testing may be recommended. It’s also important to consider both partners since about 40% of fertility cases are associated with the man, 40% with the woman, and around 10% involve problems affecting both.(4)

Fertility testing is typically covered by health insurance plans, even if those that don’t cover infertility treatment, since many fertility issues are associated with other health conditions.

For the most comprehensive and accurate results, thorough semen analysis should be conducted using multiple specimens. These tests can offer a wide range of helpful information that could identify any factors that might affect your fertility.

If your sperm count test reveals abnormal results, your physician may recommend that you consult with a fertility specialist.